Skip to content
Home > About > Who We Are > Susan Rakow 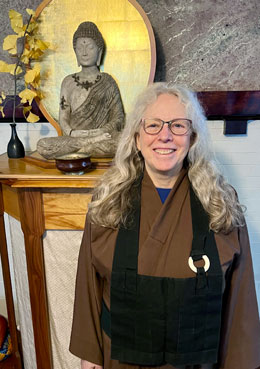 Susan Rakow is the Group Leader of the Cleveland Zazen Group. She was born in New York in 1949. She was a secondary English/Gifted teacher and university professor of education for 40 years before becoming a licensed mental health counselor (LPCC).

Susan began practicing Zen in 1968 under her root teacher, Roshi Philip Kapleau. Since then she has been maintaining a daily personal practice. She regularly attends group sittings and sesshin, and works closely with her current teacher, Roshi Bodhin Kjolhede.

Susan has been the group leader for the Cleveland Zazen Group for about 35 years. In 2004, she was invested as a member of the Three Jewels Order of the Rochester Zen Center. She has conducted weddings, funerals, all-day sittings and facilitated other ceremonies for the Cleveland Zazen Group and its sangha members. In addition, she facilitates RZC’s monthly Parent Practice group on Zoom.

Susan feels grateful to serve Zen sanghas (communities) in Cleveland, OH and Rochester, NY … and the Dharma wherever her life experiences take her.