Skip to content
Home > About > Who We Are > Roshi Bodhin Kjolhede 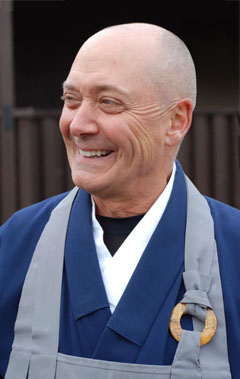 Bodhin Kjolhede graduated from the University of Michigan and came to the Center in 1970. He was ordained as a Buddhist priest in 1976 and went on to spend several years traveling extensively with the Center’s founder, Roshi Philip Kapleau, and working closely with him on three of his books.

After completing twelve years of koan training under Roshi Kapleau, Roshi Kjolhede spent a year on pilgrimage through Japan, China, India, Tibet, and Taiwan. In 1986 he was installed by Roshi Kapleau as his Dharma successor and, the following year, Abbot of the Center. Since then he has conducted hundreds of meditation retreats, most of seven days, in the United States, Sweden, Germany, and Mexico. He has published numerous articles and traveled widely to participate in Buddhist teachers’ conferences.

In his more than 35 years of teaching, Roshi Kjolhede has sanctioned seven of his students as Zen teachers; they now lead Zen centers in the United States, Mexico, Scandinavia, Germany, and New Zealand. Two of those teachers, Sensei John Pulleyn and Sensei Donna Kowal, currently serve as Spiritual Co-Directors of the Rochester Zen Center. In semi-retirement since 2022, Roshi Kjolhede now serves as the Center’s Spiritual Director Emeritus, and lives with his wife in Florida.