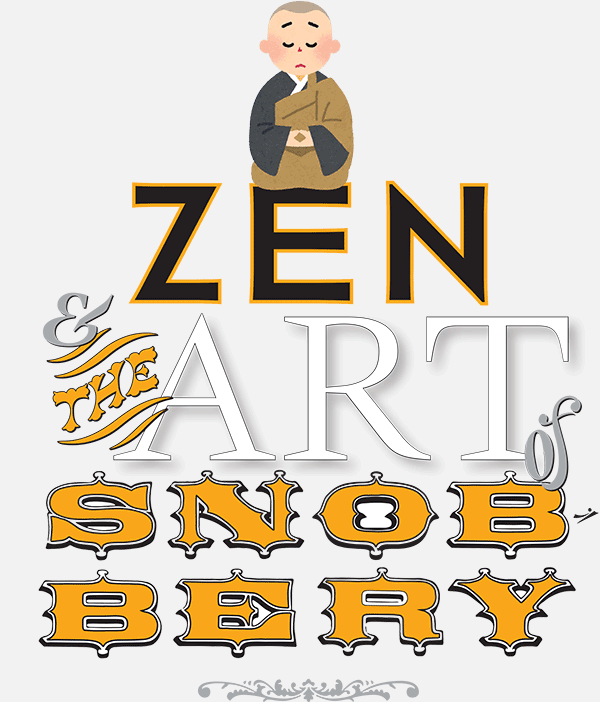 I entered the zendo for the first time, clad in my well-made brown sitting robe with my rakusu hanging proudly around my neck, and my first thought was, “Oh my God!” I had recently moved to a new town and, making use of Google, I had discovered the existence of a Zen group there. This was my first sitting with this group, and I was appalled by what I saw.

Not a sitting robe in sight, but lots of shorts, skirts, brightly patterned T-shirts, halter tops, and even a Hawaiian shirt. Paraphrasing the Wizard of Oz, I said to myself, “Dorothy, you are not in Rochester anymore.”

There were more surprises to come. When zazen was about to begin, I realized that I was the only person in the zendo sitting in half-lotus. Everyone else was sitting in Burmese posture, or in seiza on a large pile of cushions (a pile of the size that I used when I first began doing zazen), or in a chair. In fact, there were lots of people much younger than I sitting on chairs, and one of them was the jikijitsu, the person timing the rounds.

S/he had obviously not been instructed in how to strike the inkin bell properly, because it did not give off the lovely, reverberating sound that can be obtained by striking the bell on the side of its lip, rather than on top of it. The person playing the han had also obviously received little or no training, because s/he was not hitting the wooden board in the hole in its middle, and the accelerandos were uneven and temporally separated from the sequences of slower strikes.

The first round of zazen began, and I had another shock—people moved during the round. They changed postures, they stretched their legs out in front of them; one person actually left the zendo to go to the bathroom and then returned before the round ended. No one said, “No moving!”

I thought, “Don’t these people know that moving disturbs other people? Most of these people are apparently beginners, so moving must be particularly disruptive to their concentration.”

Then, a little shadow of doubt began to appear in my thoughts. An inner voice asked, “Whose zazen is actually being disrupted by the moving, your zazen or that of the people whom you are calling ‘beginners’?” I heard this snarky question, knew the answer, stopped thinking about the sitters who moved during the round, and returned to trying to count my breaths.

When I returned home that evening, I told my wife about the shorts, skirts, brightly-patterned t-shirts, and halter tops; about the number of people sitting in chairs; about the upright prostrations; and about the apparent lack of training people had been given about how to strike the inkin bell and how to play the han. As I listened to myself demeaning the sitting and the sitters, I realized, “I sound like a Zen snob. These people are kind enough to let me come practice with them, and I am returning their kindness by disparaging them. What does that say about the fruits of my own Zen practice? Isn’t there a precept about not praising oneself and disparaging others?” I was ashamed of myself!

But only temporarily. Some of the time I am still stuck in judging negatively the attire, the moving, and the lack of what I would call “Zen professionalism.” I try just to observe, without judging, but I find that I easily slip from the former into the latter. However, when I do slip into judging yet again, I hear an accusatory inner voice in the background of my thoughts, calling to me and saying, “You are a Zen snob!”

I should be able to do better than that, because I have seen this tendency in others and it is not pretty. I have noticed the bemused looks of Zen priests who have trained in Japan and who ask about Rohatsu sesshin in Rochester when I tell them that we get up half an hour earlier than usual each morning. If I take the bait and then inquire, “And what did you do at Rohatsu when you were training in Japan?” they answer breezily, “Oh, we were not allowed to lie down for the entire week.”

On my first trip to Japan, I had expected to hear some deprecatory remarks about Kapleau Roshi, since he did not complete his formal training when he trained under Yasutani Roshi. Therefore, I was surprised to hear no such comments. Instead, the first Rinzai monk whom I met told me dismissively that Yasutani Roshi is regarded by the Rinzai establishment as having been something of a madman in his strident denunciations of traditional Soto Zen practice, and that the entire Sanbo Kyodan lineage that Yasutani Roshi founded is perceived as “just a bunch of lay practitioners.”

Having admitted the bitter truth, that I have a strong tendency toward being a snob myself, I wish I could say that my judgments about the Zen group with which I am currently sitting have completely gone away. They have not, as I am reminded one night each week. On that night, after a single round of zazen, we take turns reading, one paragraph each, a chapter from a book on Zen. At the end of each chapter, the moderator says, “Well, that was interesting! What are people thinking about it?”

I want to respond, “Zen is not about thinking!” But I don’t. I have had lots of practice in keeping my mouth shut during these weekly discussions. Nevertheless, although these discussions often have a “blind leading the blind” quality about them, I must admit that they do serve a valuable function. Sharing a conversation does bring the members of this Sangha, including me, closer to each other.

There are some really admirable qualities about this Sangha. For example, since there is no staff, everyone has to pitch in to help set up for all-day sittings and for sesshin, and people have to volunteer to prepare meals for these events. Also, some people are quite ardent about their own practice. On the evening of December 7, some members of the Sangha begin sitting at 10 pm and continue until 9 am on December 8. Then, instead of going home to bed, they stay for the morning service at 10 am: two more rounds of zazen and a lecture that ends at noon.

I am also impressed by the purity of the motivation for practicing zazen in this Sangha. When I began my practice, I wanted to get something out of it. I wanted to “get enlightened” (although now I would say that what I really wanted was to come to some sort of awakening). The members of this sangha do not talk about kensho or awakening. Rather, they seem to practice just for the sake of practicing.

My judgmental self would say that the desire for awakening is crucial for serious practice because it fuels and intensifies one’s zazen. True as this may be, there is something inspiring about people who do zazen with no self-conscious motive. I find myself admiring the members of the Sangha who practice zazen not to get something for themselves, but just for the sake of the practice.

Beginning to practice with a new Sangha has taught me many things. First, I have a regrettable tendency toward being a snob. Second is that, although I may have practiced zazen for many more years than most of the people with whom I am currently sitting, I keep realizing that, fundamentally, I am not superior to any of them. Practicing with this new Sangha reminds me that from the beginning, all beings—even those who do zazen in shorts, halter tops, and brightly patterned t-shirts and who move in the middle of rounds—are Buddhas.
I am grateful to my new Dharma sisters and brothers for helping me to relearn this fundamental lesson every time that I do zazen with them. I am also grateful to them for providing me with the opportunity to see, over and over again, how hard it is for me to break the habit of Zen snobbery and for inspiring me to keep trying.  / / /

THE AUTHOR is a longtime member of the Rochester Zen Center.  Although he is unable to hide his true face, he would like to hide his name.