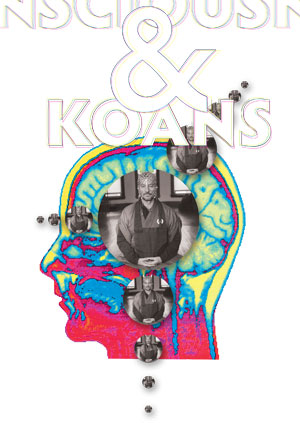 When I left the staff at Rochester Zen Center three years ago, I returned to work at the Center for Sleep and Consciousness at the University of Wisconsin–Madison, which is run by Giulio Tononi. I am currently working on a project to investigate different states of consciousness, using electroencephalography (EEG) during the normal waking state as well as during different states of meditative absorption. Since the study is ongoing, I cannot discuss any details or results. I can say that the practice of meditation presents a unique opportunity for the study of consciousness. Trained meditators are more likely to have the ability to recognize when they are being carried away by thoughts or emotions and can report when they have entered states of awareness where thoughts or emotions are relatively absent. We know that the default mode of ordinary waking consciousness, when a task is not being attended to, is mind-wandering. Being able to accurately report when one is in a state other than mind-wandering allows us to make predictions about theories of consciousness that can be tested.

My main goal here is to share a little about the intersection between doing research into the nature of consciousness using the scientific method and doing research on the mat using the mind to investigate the Mind. (Or is it the other way around?) Both of these styles of investigation begin with Bodhidharma’s answer when Emperor Wu asked, “Who stands before me?”: I don’t know!

What is meant by the word “consciousness”? Put in its simplest terms, it is to experience something. It does not matter what that experience is; you know you are having an experience even if that experience is nothing more than the experience of being present. Descartes found that the only thing one can know for sure is, “I think, therefore I am” (cogito, ergo sum). The word “think” can perhaps be taken a little too literally, because one could just as easily say that it feels like something to be without any thought whatsoever. In fact, I would argue that we can never have an experience of not being. When we fall into a deep sleep without dreams, then wake up, we have nothing we can say, remember, or reflect on—nothing we can call “experience”—during this period of “non-existence.”

So consciousness is the experience of being in all its myriad forms, which includes dreaming, since it feels like something to dream. And even though I know, without a doubt, that experience is, I do not know for sure if anything or anyone else is having an experience. I can only infer that it is the case by the way they interact with the world. If being (I will use “being” and “experiencing” interchangeably) is the foundation of all that is, having a working theory of this vast mystery seems paramount, for it is the very foundation of all our scientific knowledge, our culture and institutions. Without it, there would be no experience of life. So, what do we know?

One example of a conscious experience is seeing the color red. We know about many of the mechanisms by which one sees the color red. Light waves enter the eyes, which get converted to electrical signals and travel to multiple areas of the brain. We know the physics of how light waves travel, bounce off an object, and enter the eye. Yet the actual felt experience of what it is to see red, and who is having this experience, is still a vast mystery. Perhaps it is because experience is closer than close. Some may argue that this closeness is what allows experience to happen at all. As the philosopher Keiji Nishitani put it, “The eye sees because it cannot see itself; fire burns because it cannot burn itself.” Perhaps it is only because of our complete inability to comprehend what consciousness is that an experience can arise at all?

Some would argue that the mystery of consciousness will never be solved and that humans are fundamentally incapable of solving the “hard problem.” The hard problem of consciousness is how experience arises from the brain or some other mechanism that is capable of giving rise to experience. The soft problem, which we know much about, is about the specific contents of consciousness, such as how we see, hear, taste, or store memory. Some scientists and philosophers think it is just a matter of time before we unwrap its mysteries. Yet others believe that it is all an illusion, and we will always be chasing a phantom. It is only very recently, in the last decade or so, that the study of consciousness has been taken seriously by the scientific community. We really are in the beginning stages of attempting to investigate scientifically just what this most common, normal experience of being is. So, what happens when the backward step is taken on the mat or through the looking glass of the mind and we turn the instrument of our being back onto being itself?

In many ways, testing a scientific hypothesis and taking up a koan are rather similar: we have to begin with the foundation of not knowing. If we knew, why take up a question at all? We also need to have a method to test our predictions, beliefs, and assumptions—a method independent of our own logic, intuition, and judgment. As Richard Feynman put it, “The first principle is not to fool oneself, and you are the easiest person to fool.” In science, there has to be a way of proving that a hypothesis is incorrect. This is why the question of whether God exists is beyond the scientific method: because there is no test to prove that God does not exist. Of course, this does not prove that God actually exists, as some may argue. One of the current challenges of studying consciousness is to come up with a theory that can be tested empirically. One can come up with all sorts of ideas about how consciousness arises, but if it cannot be disproven, one could easily be fooling oneself.

The same principle applies when working on a koan. I can imagine I have the answer to the koan that I am working on, or that I have had some experience into the non-dual nature of reality, but without having some independent observer, such as a seasoned Zen teacher, who has walked the path on her or his own, I could easily be fooling myself. Working on subsequent koans gives students the opportunity to test again and again the limits of their insights and the ways in which one can fall back into fooling oneself. It is all rather humbling, just as working in the field of science is—the further you go, the less you know.

As the Buddha so elegantly put it approximately 2,500 years ago, ignorance lies at the root of suffering. Zen practice helps us to cut through false ideas, thoughts, and concepts of self/other, and it can be tested not only by how much we suffer, but by the suffering that continues in those around us. The scientific method helps us to see through false beliefs that we once held to be true. It also allows us to adjust and update our false ideas and beliefs as we test our predictions in a rigorous manner through careful experimentation. There is never a final arrival point: the more we discover the more mysterious and surprising the universe becomes. It does not mean we cannot use the knowledge we have gained to inform our decisions. It would be foolhardy not to. It just means we must be flexible enough to adapt to change as new information arises.

This seems to be the rub for all of us: change, the only certainty. A lifelong Zen practice seems to have the same effect; as Dogen put it, “You have only arrived when you are halfway there.” When knowledge becomes solidified into belief that no new information or experience can change, we know we are stuck, and the result will be suffering either for ourselves or others. This is one of the major challenges in both science and Zen practice: to keep questioning what we think we know even when this inquiry may lead to uncomfortable answers. One must be willing to have the rug pulled out again and again. And this is where both science and Zen practice become personal. I have to be willing to be uncomfortable: to prove my hypothesis wrong; to admit I do not know; to keep investigating the endless koan of what it means to be alive and be willing to be vulnerable; to not have the answer; to show up with all my frailties; to embrace being a human on a small planet hurtling through space to a place I cannot see—and don’t even have the ability to imagine.

Paradoxically, many enter the field of science or Zen practice to become less vulnerable, to have some answers to life’s big questions. Yet we find all “progress” is found in not knowing. Koan 20 in the Book of Equanimity brings this up in the dialogue between Dizang and Fayan. When Dizang asked Fayan, “What is the purpose of your pilgrimage?” Fayan said, “I don’t know.” To which Dizang replied, “Not knowing is most intimate.” Another translation of this last line is “Not knowing is nearest.” With that, I leave you with just another finger pointing to the moon, with no answers and only questions. / / /

is the Group Leader at the Madison Zen Center and works as a Research Specialist for the Center for Sleep and Consciousness at the University of Wisconsin-Madison.