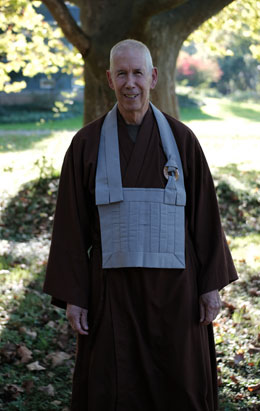 Sensei John Pulleyn is a Co-Director of the Rochester Zen Center. Together with Roshi Bodhin Kjolhede, he provides Zen training and spiritual guidance to the Center’s members worldwide.

Born in St. Paul, Sensei Pulleyn was raised in Minnesota and Ohio, and graduated from Oberlin College with a BA in history. In 1968 he came to Rochester to join the Center’s staff and train under Roshi Philip Kapleau, at a time when the Arnold Park buildings were under reconstruction. Later, he worked as a painting contractor and a software developer while raising two children with his wife Chris. A DWI arrest in 1990 inspired him to evaluate his life and resulted in an increased commitment to Zen practice. He also returned to school for a BS in nursing and worked as a pediatric nurse for 10 years.

In 2003, Sensei Pulleyn rejoined the Center’s staff as Head of Zendo, a position that he held for 15 subsequent years. During that time he gave numerous Dharma talks, provided private instruction, and regularly led meditation retreats (sesshins). On August 20, 2021, he was sanctioned as a Zen teacher by Roshi Bodhin Kjolhede.