Skip to content
Home > About > Who We Are > Rick Smith 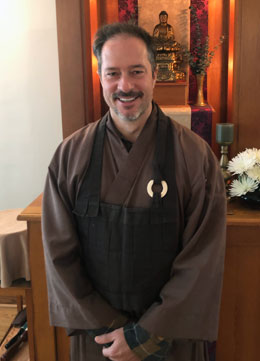 Rick Smith is the current Group Leader of the Madison Zen Center and has been authorized to give private instruction and lead sesshins. He served as group leader from 2010-2013 and again from 2016 to present. In between those times he spent a year and half on staff at the Rochester Zen Center.

He was born in Rhinelander, Wisconsin, and became a member of the center in 2004. Prior to that, he explored various types of meditation and spiritual practices until finding his home in Zen practice.

He currently works at University of Wisconsin-Madison as a Research Specialist in the department of Psychiatry for the Center for Sleep and Consciousness. His primary interest and work involve investigating long-term meditators to explore how meditation induces neural plasticity and to test hypotheses related to integrated information theory of consciousness.

When he is not on the mat or working, he enjoys trail running, snowboarding, and travel.