Skip to content
Home > About > Who We Are > Sensei Donna Kowal 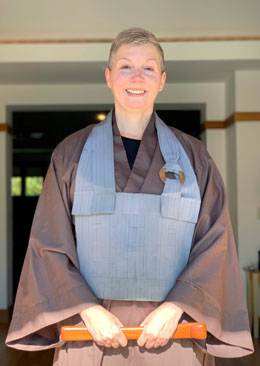 Sensei Donna Kowal was authorized as a Zen teacher by Roshi Bodhin Kjolhede in 2022 and serves as Co-Director of the Rochester Zen Center, in partnership with Sensei John Pulleyn.

She was born and raised in Staten Island, New York, and first learned about Zen practice when she was training in martial arts. She became a member of the Center in 1998 after attending an introductory Zen meditation workshop, and was a local Sangha member for some 20 years before joining the Center’s staff in 2019.

Prior to joining staff, Donna-sensei committed herself to attending as many sesshins as possible and serving as an active volunteer, including Editor of Zen Bow for 14 years. During that time, she had a successful career in academia as an award-winning professor and author (Ph.D. in Rhetoric & Communication, University of Pittsburgh, 1996). She also traveled extensively as part of her leadership in study abroad programs.

Most recently, as a Zen Center staff member, she served as Head of Zendo at Chapin Mill, the Center’s country retreat facility, and Manager of the Sangha Programs Office, which offers educational and social programs tailored to Center members and the wider community.

Donna-sensei is currently a novitiate priest and splits her time between Chapin Mill and Arnold Park. During time off from the training program schedule, she enjoys hiking and birding.